Who Are You Hiring?

When Hiring a Pilot 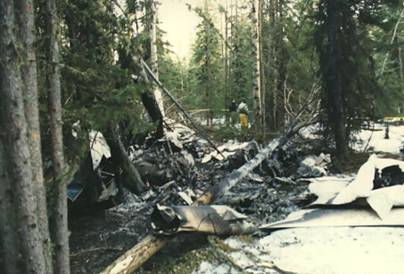 The Cessna 337 pilot was en route on an IFR flight plan originating from an uncontrolled aerodrome in Olds to Peace River, Alberta. Thirteen minutes after takeoff, he received his IFR clearance and was cleared to maintain 8000 ft. Several minutes later, he was observed at 6600 ft. and the controller queried about the altitude. The pilot responded that he was between layers but would start a slow climb. Three minutes later, he was still at the same altitude and was again queried about his intentions. This time, he responded that he had a rough-running engine but would continue the climb and make a decision on the engine when he got to Rocky Mountain House.

Nineteen miles from Rocky Mountain House, the pilot requested and received clearance to the airport. Radar showed him heading to the nondirectional beacon.

Twelve minutes later, he asked for and received the latest weather from the UNICOM operator: 500 ft. broken and 1500 ft. overcast, with visibility 0.5 mi. in light snow and fog. He stated that he had the ground in sight.

Radio contact was lost and the aircraft failed to arrive. An air/ground search located the plane the following morning 2 mi. from the airport. It had struck a stand of trees in a steeply banked out-of-control attitude and been consumed in a post-crash fire. Neither the company president nor his pilot had survived.

Several witnesses had observed the aircraft near the airport. All reported that the front propeller was rotating slowly. (Transportation Safety Board (TSB) investigators later confirmed that the front engine had a cracked No. 4 cylinder, accounting for the reported rough-running engine. The front propeller was at the low-pitch stop at impact. However, the pilot had not completed the engine failure check to the point of feathering the propeller.) One witness familiar with the C337 stated that the rear engine did not sound as if it was at high power and that the aircraft appeared to be wallowing at low speed in a nose-high attitude. These witnesses also reported heavy snow showers in the area, with visibility as low as 1/4 mi. in snow and fog.

The pilot had received a detailed weather briefing by phone prior to the departure from Olds. The forecast predicted extensive low cloud persisting along the foothills throughout the forecast period, creating ceilings 0 to 1000 ft. AGL, with visibilities of 0.5 to 4 mi. in snow and fog. Severe clear icing in local freezing drizzle was included in the forecast. Another C337 pilot who flew into Rocky Mountain House 30 min. after the accident reported picking up 1/2 to 3/4 of an inch of ice during the approach. The accident aircraft was not equipped for flight into known icing conditions.

Although the pilot held an airline transport license, his medical category had expired and his license was valid for private pilot privileges only. His instrument rating had expired 10 months prior to the accident flight. During the two years before it expired, his instrument rating had twice been suspended. It was first suspended when he attempted to take off into known icing conditions with an aircraft that was not properly equipped ¾ during an instrument check ride. The second suspension came when he failed to follow his air traffic control (ATC) clearance. He did both on the accident flight.

He initiated this flight despite his knowledge of the weather and icing conditions and the capabilities of the aircraft. He maintained an altitude of 6600 ft., between layers, possibly to avoid icing conditions, without informing ATC of the deviation from the clearance to 8000 ft. that he had accepted.

When hiring a pilot, how carefully do you check his or her paperwork, capabilities, past performance and references?

Reduced performance and environmental conditions ended with the loss of control at an altitude that did not leave room for recovery.