Snowbanks on the Runway 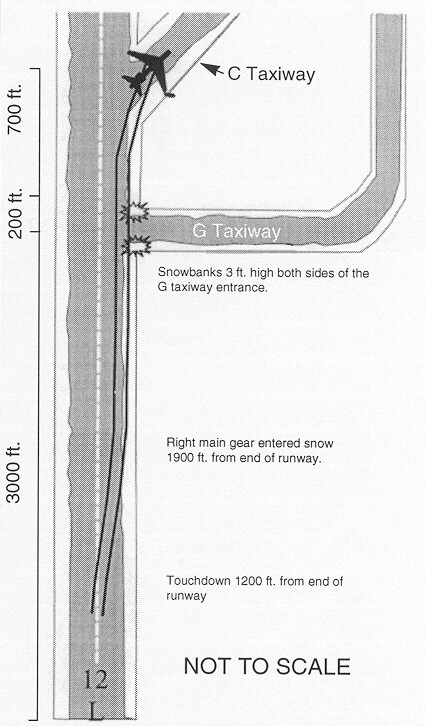 On March 14, 1997, an empty Boeing 727 was returning from Winnipeg, Manitoba, to Hamilton, Ontario. The flight crew conducted an instrument approach to Runway 12L at Hamilton International Airport, with snow-clearing operations interrupted to allow the aircraft to land. The aircraft touched down on the centre line of the icy runway 200 ft. wide and drifted to the right, encountering snow and slush on the uncleared portion of the runway. The aircraft continued to travel in the contaminant along the right side of the runway until the right-hand landing gear struck two three-foot snowbanks lying at 90 degrees to the entrance of G taxiway (see graphic). The right main landing gear failed rearward as a result of the contact with the two snowbanks.

When the right main landing gear failed, the right wing dropped and the wing spar settled down onto the two right main tires. The right wing tip contacted the ground and took out several runway edge lights as the wing tip slid along the ground. The aircraft yawed to the right and came to a stop on C taxiway. The three crew members were uninjured and exited the aircraft via the forward left door, using the emergency rope. The aircraft was substantially damaged.

In its Final Report A97H0003, the Transportation Safety Board of Canada (TSB) determined that the aircraft drifted to the right on the contaminated runway because of stronger than reported crosswinds. The aircraft hit snowbanks left on the runway during snow removal operations, causing the right main landing gear to fail in overload. Other factors contributing to the occurrence were that the flight crew applied an erroneous low wind speed to the landing calculations, and an equipment operator did not notify anyone of the snowbanks on the runway because of a misunderstanding by some ground crew and tower personnel that the uncleared portions of runways are unusable to aircraft.

Among its findings, the TSB determined that the airport anemometer was indicating lower-than-actual wind speeds because of an ice buildup on the anemometer. Although the tower notified the flight crew that the wind speed could be stronger than reported, the crew kept their crosswind calculations based on the reported winds.

Transport Canada (TC) convened a working group to examine the issue of turbo-jet performance with respect to wet and contaminated runway operations. The working group’s final report, which recommends changes to the CARs, is now before the Commercial Air Service Operations committee for review. If the recommended changes are implemented, crews should be better informed to base decisions when operating to or from contaminated runways.

The TSB sent a safety advisory to the Atmospheric Environment Service (AES) on erroneous readings from ice-contaminated anemometers, highlighting the importance of having accurate wind information, especially during adverse weather and slippery runway conditions. AES, in a letter to the TSB, replied that testing has begun of newly developed ice-free anemometers to qualify them for use in Canada in the air navigation system. As there was a misunderstanding among airport workers that the uncleared portion of a runway is unusable by aircraft, a safety advisory on snowbanks on active runways was sent to TC. The Department replied that it is in the process of reviewing the regulations and standards for airports and will incorporate more stringent requirements concerning snow removal and ice control at airports. In addition to an A.I.P. Canada aviation notice called "Winter Operations — Beware of Snowbanks" issued on January 29, 1998, TC issued Aerodrome Safety Information Circular 98-003, "Active Runway Winter Maintenance" on November 9, 1998. The purpose of the circular is to emphasize active runway winter maintenance awareness, and to recommend that airport operators review their snow removal and ice control plan, especially the sections on snow clearing operations and surface condition reporting.