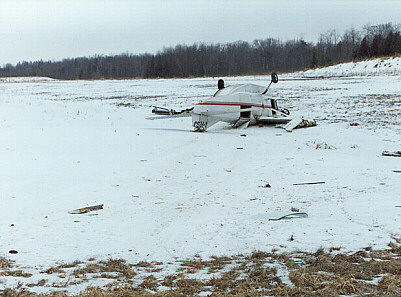 We often discuss the dangers of flight in freezing precipitation, but we have relatively few documented occurrences in which it played a critical role. The following event, based on the Transportation Safety Board of Canada (TSB) Final Report A97O0032, provides us with such a chilling tale.

A Cessna 208B Caravan departed on March 4, 1997, from Hamilton, Ontario, on an instrument flight rules (IFR) cargo flight to Barrie–Orillia (Lake Simcoe Regional) airport at 07:15 Eastern standard time (EST). The flight, flown at 5000 ft. above sea level (ASL), was approximately 15 NM southwest of the airport on a radar-vectored heading to the airport. The pilot, who was alone on board, descended to 3000 ft. ASL and flew a full VOR/DME approach. When he got closer to the airport, the pilot was asked on the radio by a company employee if he was going to land, as the weather conditions were marginal. He replied that he would know in just a moment, and then almost immediately reported on left base for Runway 28. The aircraft crashed moments later, fatally injuring the pilot.

The aircraft struck the ground while in a steep, left-banked, nose-down attitude. Initial impact was with the left wing tip, 240 ft. short of the threshold of Runway 28. The ground scar from the wing tip was in line with the runway centreline, with the wreckage trail on a 330°M heading.

Mixed rime and clear ice accumulations were found on the unprotected leading edge surfaces of the aircraft; however, the parts protected by anti-ice equipment were mainly free of ice. The larger pieces of the broken windshield had ice adhering to them, while the heated portion of the windshield anti-ice panel was free of ice.

The aircraft was equipped for ice protection with the manufacturer's Known Icing Equipment package, which included pneumatic de-icing boots on the leading edges of the wings and wing struts, horizontal and vertical stabilizers, electrically heated propeller blade anti-ice boots, a detachable electric windshield anti-ice panel, a heated pitot/static system, and a standby electrical system. Engine bleed air supplied heat to the cabin and hot air for the windshield defrost, but the controls were selected to direct hot air to the forward cabin only, and the windshield defrost was not selected. The detachable windshield anti-ice panel was approximately 19 in. high by 9 in. wide.

An area forecast was available to the pilot, and the prognosis for the intended flying area was for cloud to be generally 2500 ft. ASL overcast; visibility 6 SM or greater, with occasional visibility 3 to 6 SM in light snow showers; visibility, at times, ¾ to 3 mi. in light snow showers with stratus/snow ceilings 600 to 1000 ft. ASL; a few stratus cloud ceilings 500 to 1000 ft. ASL; and visibility ½ SM in light freezing drizzle, light drizzle, light freezing fog, light fog in flow off the Great Lakes. Light to moderate rime icing was forecast above the freezing level and moderate mixed icing in light freezing drizzle below 4000 ft. ASL. The freezing level was at or near the surface.

Toronto–Buttonville airport was the closest for which a terminal area forecast (TAF) was available to the pilot. The TAF issued at midnight on March 3 (23:30 EST) called for conditions after 07:00 to be as follows: wind from 040° T at 8 kt., visibility 4 mi. in mist, and cloud 2000 ft. above ground level (AGL) overcast. Conditions were forecast to temporarily fluctuate to visibility 1 mi. in mist with cloud 800 ft. AGL overcast between 07:00 and 12:00.

The final report does not specify whether or not the pilot actually read the area forecast, nor does it specify whether or not he requested updated weather information en route. As far as the investigation could determine, prior to descending on the approach, the pilot did not know freezing drizzle was falling at the airport. Several witnesses reported freezing drizzle at, and in the vicinity of, the Barrie–Orillia airport prior to and at the time the aircraft was on approach.

The VOR/DME final approach radial intersects Runway 10/28 from the southeast at a 29° angle, and requires a circling approach to land in either direction. Runway lighting was available via the aircraft radio control of aerodrome lighting (ARCAL) system, but was not activated by the pilot. The runway was covered with a light dusting of snow and thin film of granular ice at the time the pilot was on approach. No aircraft had landed or departed from the runway on the morning prior to the accident.

The flight was apparently without difficulty until the pilot descended to lower altitudes on approach to the airport, where it is likely that he encountered freezing drizzle below 4000 ft. Flight in freezing drizzle would result in a buildup of clear ice on the unprotected parts of the aircraft and, in particular, on the aircraft windshield. The pilot's forward visibility through the windshield during the later stages of the approach was probably limited to the portion of the windshield protected from ice by the detachable electric windshield anti-ice panel, making any tight circling manoeuvres very risky at best. Ice accumulation on the aircraft airframe would degrade aircraft performance and require that the pilot maintain a higher than normal airspeed on approach.

The grey overcast sky, the reduced flight visibility in freezing drizzle, and the lack of vertical guidance aids on the approach, combined with the light dusting of unbroken snow on the runway, would make it difficult for the pilot to visually judge his height above ground on final approach. After sighting the runway from close to the airport, following an non-precision IFR approach, the pilot elected to manoeuvre the aircraft for an immediate landing on Runway 28. Because of the aircraft's proximity to the runway, the pilot had to carry out a steep, descending left turn to position the aircraft for landing; this is not a recommended manoeuvre during circling approaches. A rapid accumulation of clear ice on the aircraft airframe and the poor visibility may have influenced his decision to attempt an immediate landing instead of carrying out an appropriate circling approach procedure.

Although icing conditions were forecast along the planned route of flight, the report does not discuss the pilot’s pre-flight planning, making it difficult to properly assess his decision to put the aircraft into a forecast icing condition. Nevertheless, it remains the pilot’s responsibility to ascertain whether or not his aircraft was adequately equipped to operate in the forecast conditions. The C208 is certified for flight into known icing conditions according to Chapter 523 of the Airworthiness Manual, which refers to the icing certification criteria contained in the U.S. Federal Aviation Regulations, but those do not cover flight in light freezing drizzle or light freezing fog.

The TSB could not determine why the aircraft struck the ground during the turn to the final approach, but said it was probably because the pilot misjudged his height above ground or because the aircraft stalled since there was ice on the wings. Regardless of the technical and physical reasons for the crash, we cannot help but wonder what other factors led this pilot to operate his aircraft into known icing conditions.

Pressure to complete the flight perhaps? Likely. Why didn’t the pilot use the windshield defrost? Was it because he forgot or because of poor knowledge of his aircraft systems? If he was aware of and understood all of his de-icing equipment, the windshield defrost would definitely have been on. Why didn’t he avail himself of the area forecast? Could it be because he had difficulties interpreting it, like about half the pilots in this country? To think of it, the real causes of this accident have little to do with the final event, and this is why we should all reflect on the buildup to the crash, rather than the outcome.

One last word on area forecasts. How do you feel about them? I would dare to say that most pilots dislike them because it is difficult to interpret or understand them, and mostly, because it is difficult to form a mental picture of the weather situation based on them. Well this is about to change as the current textual format of area forecasts will soon be changed to a graphic description, like a weather observation map, which will make them a lot easier to interpret.