The Cost of No Flight Plan Itinerary 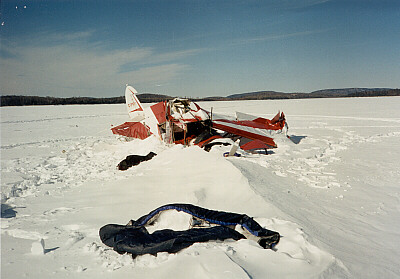 One Monday in early March, a pilot and his friend were preparing to go on a fishing trip from lac aux Sables to lac Drouin, Quebec, in a ski-equipped Piper PA12 in visual flight rules (VFR) conditions. The pilot told his wife they would be back Friday if the weather permitted, but said she was not to worry if conditions were poor, because they would wait until the weather improved.

After three uneventful days of fishing, the two men decided to depart lac Drouin at noon on Thursday and return to lac aux Sables one day before they had planned to avoid bad weather. On the same day, a commercial carrier in Latuque grounded its aircraft because of adverse weather, including freezing rain and reduced visibility.

A few minutes after take-off, the aircraft encountered snow, then mist, and finally entered mist, but the pilot still did not adopt a new plan. The aircraft crashed in cruise flight on lac Sincennes, about 40 mi. west of Latuque, in conditions conducive to white-out. The aircraft was severely damaged, but both occupants survived the crash.

The pilot sustained head injuries, and the passenger’s jaw and two legs were fractured. The men moved away from the aircraft because they feared it would catch fire. A short time later, the pilot gave the passenger a sleeping bag that he kept in the aircraft, and told him he was going for help. Unfortunately, there was no emergency locator transmitter (ELT) on the aircraft, and, of course, the only person who knew their itinerary was told that they would not return until Friday. But even worse: she was told not to worry if they didn't make it back on Friday.

By Sunday, having received no news from her husband, the pilot’s wife told a friend that her husband had not yet returned, but that she thought he was staying at the cabin until the weather cleared. Search and Rescue (SAR) was notified at 19:20 EST on Sunday, and the aircraft was found the next morning, Monday, around 08:30.

The pilot’s body was found half a mile from the wreckage. He had dug three holes in the snow at different locations, probably for shelter from the weather. The injured passenger could not seek shelter in the wreckage because the pain from his fractures was too intense. He spent three nights in the sleeping bag on the frozen surface of the lake. By Sunday morning — the first nice day — his legs were both frozen but he was able to crawl to the wreckage. The severely injured passenger was finally rescued on Monday morning, but his legs had to be amputated below the knee.

Analysis - What’s left to analyse? The events recounted above are clear enough, and the lessons are also clear. Your flight plan or itinerary is crucial, and you absolutely must file it like a professional, no matter where you are going. Never make a vague plan or your rescue could be at risk.

If you must depart sooner, always advise a responsible person by whatever means are available before departing, or as soon as possible afterward. If proper notification is impossible, stick to your original plan or leave later, not sooner, but advise the authorities to avoid an unnecessary search.

If you have no ELT on board and you fly over isolated areas, you are taking unacceptable risks. This recent accident is exactly what we are all trying to prevent, and it is regrettable that the story had to be told here.

Finally, in a survival situation, there are some basic rules that everyone should know. First, it is essential to provide for your own well-being and that of your passengers. That means: give first aid, find or build a shelter as close as possible to the accident site, and, if you can, make a fire to keep warm and maintain morale. Once physical protection is taken care of, find a source of water, and, if possible, food. Think about preparing signal fires, especially if the site is hard to see from the air. If you venture away the site for any reason, blaze your trail on the trees so you can find your way back. SAR will find you sooner or later. If you have never had survival training, call the nearest SAR Centre for further details.

The passenger's life was almost certainly saved by the sleeping bag, and this proves the value of having survival gear on board. However, is it possible that both men could have survived if the pilot had stayed with the passenger so they could keep each other warm, and so they could reassure each other while waiting? At the very least, the pilot would have had a greater chance of survival. The decision to go for help in these circumstances, although honourable, was, it would seem, an error in judgment as to the initial action to take in a survival situation.

And last but not least, regarding flight in marginal weather - as we all know - aviators should never play Russian roulette with the weather because five out of six chambers will be loaded!