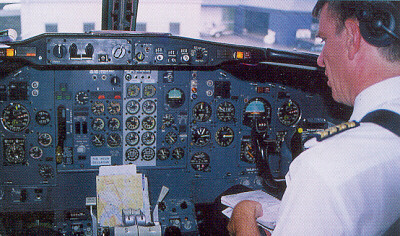 Crew Resource Management (CRM) is a vital element of flight crew training which, after initial reluctance towards its acceptance, is now mandated across the globe. In this feature, Mr. Huang Jian, Chief Engineer of the Simulator Training Center, China Civil Aviation Flight College, considers how CRM is approached and viewed in China. This article is condensed from CAT, the Civil Aviation Training magazine, April 1999 issue, with permission.

CRM training is an industry-wide initiative to provide flight-crew members with the skills and knowledge required to make efficient use of all available resources during ground and flight operations. These resources include all flight-deck sources of information, all available crew members, ground service technicians and mechanics, and airline dispatchers and engineers. CRM training is intended to help flight-crew members safely operate today's modern jet transports.

CRM has been around for nearly 20 years. It got its impetus from various places: the U.S. National Aeronautics and Space Administration (NASA), academic research and the airline industry. A NASA-funded study in 1979 using Boeing 747 flight crews showed that those crews who made effective, integrated use of cockpit resources performed in a satisfactory manner. Subsequent analysis of these crews' performance showed a direct relationship between performance and effective intracockpit communication. Most major airlines have established or adopted a formal CRM training program for their flight-crew members.

It is critically important that instructor pilots be able to recognize poor CRM skills in their students and make serious efforts to remedy the situation. Captains and first officers must be made aware of the importance of proper CRM and how it affects the safety of modern airline operations. There are nine major skill categories or attributes.

The captain's authority is a defined set of command duties and responsibilities and the discretionary power to carry them out. The captain is ultimately responsible for the safety of the passengers, the flight crew and the aircraft. He/she is responsible for adherence to all regulations and directives. First officers are also required to learn the duties and responsibilities of the captain in case the captain becomes incapacitated. Someone who demonstrates the proper knowledge of captain's authority should be able to:

This is the recognition and critique of inadequate performance and the explanation and demonstration of correct procedure. A crew member conducting training and development of fellow crew members should take an active and sincere interest in seeing them improve and should offer them help and encouragement. This is primarily the captain's responsibility, but it is also a mutual responsibility of all crew members because of the varying amounts of experience that exist in the crew. For example, a senior pilot can offer suggestions and encouragement to a less experienced pilot after a not-so-perfect approach, but without degrading or humiliating the individual. An experienced first officer may also help a new captain with certain cockpit duties as needed.

Someone who demonstrates the proper training and development of crew members should be able to:

This is a goal that, when properly accomplished, results in a positive group climate, open communications, mutual respect and confidence among crew members, and free and open exchange of ideas without fear of repercussion. This is also the responsibility of the captain. For example, the tone in the cockpit is relaxed and supportive. Crew members do not interrupt one another, they exhibit patience, and they answer questions directly. An individual who properly demonstrates this CRM attribute should be able to:

Communication is the mechanics, art and craft of successfully and accurately transmitting and receiving messages. Communication can be verbal or non-verbal and has four major elements: inquiry; advocacy; conflict resolution; and critique.

"Advocacy" means stating a position, sending a message and making sure the message is received.

"Conflict resolution" means acknowledging and reconciling differences in information or advocated positions. For example, the captain may advocate going left of the thunderstorm, and the first officer may advocate going right; conflict-resolving communication takes place, and the crew agrees to go right. Conflict resolution does not mean that there is a personal conflict.

"Critique" may be on-going or related to a specific task. On-going critique is the crew's constant review and communication about the flight plan and flight events. For example, a crew is engaging in an on-going critique when they note that their fuel burn is off by 6000 lb. over a particular checkpoint and then discuss the variation. Task-related critique involves giving and receiving feedback after a task or a flight is complete. This type of critique is often more difficult for crew members, in part because it has the connotation of being "critical of the individual." Note that critique is a neutral term, and it should also include important communication about good performance.

Communication is the most basic CRM attribute and is critical to safe aircraft operation.

Someone who demonstrates proper CRM communications should be able to:

This is an efficient and logical sequence of crew actions that generate a solution to a problem. The process is as follows:

An individual who demonstrates proper problem-solving abilities should be able to:

This is the determination to act, or not to act, in response to an input or event. Decision making occurs after all relevant information has been solicited and gathered, positions have been stated, and any differences or disagreements have been resolved. Proper decision making should result in a clear plan of attack that is supported by all crew members. Decision making is a necessary part of problem solving and must be done in a timely manner.

Someone who demonstrates proper decision-making abilities should be able to:

This is the ability to effectively prioritize and sequence work required for safe flight operations while avoiding work overload. An individual who practices proper workload management, assigns duties and responsibilities clearly, anticipates problems, and plans for their crew does not become overloaded at critical times. While managing the workload is an on-going task, it is most important in high workload and/or time compressed situations.

Someone who demonstrates proper workload management should be able to:

This refers to the crew's consciousness of aircraft status in relation to operational and environmental conditions. Situationally aware crews know where the aircraft is, and where it will be. They are informed of all available cockpit resources and are alert to the information provided by flight displays, navigational aids, the FMS and other crew members.

A situationally aware crew member should be able to:

This is the flight crew's use of resources available outside the cockpit. Effective resource management requires that crew members know the available sources of information and how to use them.

A crew member who demonstrates proper resource management should be able to: