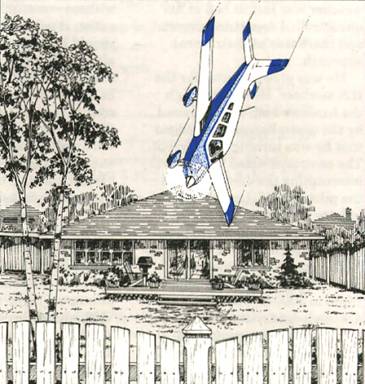 There are times when you just don't take off. There is no question about it, no thought needed, when, for example, the weather is totally outrageous, the airplane is not really airworthy or some other problem exists that makes [the] proposed flight just downright dangerous. Every pilot is confronted with such circumstances every so often. There is little doubt about what could happen if the airplane leaves the ground that day.

One pilot's reason for departing VFR into instrument meteorological conditions was that he needed to get his Piper Archer from airport A to airport B 14 mi. away to have it repaired so that he could leave for Florida the next morning.

He had had a total electrical failure the previous day while practising instrument approaches with a friend. He was recharging the battery but needed to get his alternator repaired. The problem was that the weather was solid IFR.

When he called the FSS that morning for a weather briefing, he explained to the specialist that, while he held an IFR rating (having 600 hrs' total time, of which 60 hrs were instrument time and 370 hrs were on type), he could not file an instrument flight plan because of his electrical problem. If he were flying VFR, he could use battery power for his radio and transponder to enter the Class C airspace at airport B.

The weather at B was 300 ft. overcast, with visibility 0.75 mi. in light rain, and forecast to stay that way until evening. The briefer told the pilot that VFR was not recommended.

The pilot explained that he needed to get to B for repairs since he was leaving early the next morning for Florida. "Well, the thing is, if I could fly there IFR... but it's just not legal for me to do that, you see, with only the battery working."

"The alternator is completely out, and I don't know how long the battery is going to last, much less if I'll get the airplane started."

"I guess I'll check with you again, maybe around noon. When will this be updated?"

The pilot's urgency was evident in the conversation. When he called back, he repeated his story about the alternator failure and the need to fly VFR to B for repairs. The updated forecast for B called for 500 ft. overcast and visibility 2 mi. for the rest of the day and evening. He told the briefer that he would be in touch with the tower at B in case the weather improved enough for him to get there.

When he called the briefer back a third time just before 5 p.m., he told much the same story, but this time, instead of saying that he needed VFR, he said, "I have to get special VFR." He had decided to go regardless of the weather.

The briefer advised him to wait until morning, when the weather would improve. The actual weather at B was 300 ft. overcast and visibility 2 mi., with the forecast not much better for the rest of the night. The pilot thanked the briefer, hung up and called the tower at B. He advised the controller of his need to get special VFR into the control zone. After confirming that he had a radio, the tower controller advised him to contact the terminal controller after takeoff to make his request.

The pilot did that just about an hour later. He was given a transponder code, identified on radar and advised that there would be a 5-min. delay because instrument approaches were in progress at B. When the clearance was given, the pilot asked for a heading to the airport. He was assigned a vector.

A Cessna 421 pilot flying the ILS approach at B overheard the conversation. When he checked in on the tower frequency, he advised that conditions on final were not conducive to special VFR. That information was passed on to the arrival controller handling the Archer.

When told that the ceiling on final at B was 300 ft., the Archer pilot replied, "Well, I guess it's too late for me to go back. So, I'll fly the approach, okay?" Since only 14 mi. separated the two airports, it is likely that the weather was just as bad at his uncontrolled departure airport, and there was no instrument approach.

The controller immediately responded by telling the pilot to climb to 3000 ft. The pilot acknowledged, but added, "I'm going to lose communication pretty soon. My battery is pretty bad." The controller intended to provide a surveillance no-gyro approach and he began giving directions to turn, stating when to start the turn and when to stop. The static-filled transmission "DG not working" was the last from the aircraft. It crashed in a residential area, killing the pilot. No one on the ground was hurt.

Including the time required for engine start-up, the aircraft had been operating at power for about 30 min. when it crashed.

Investigators found no indication that the gyro was not operating normally at impact. Even without communication or navigation capability, the pilot should have been able to fly the aircraft. However, it is possible that, in the high-stress situation, he started to overcontrol the aircraft to the point where he thought that the instruments were malfunctioning. When he stopped believing and scanning his instruments, he apparently became disoriented and lost control.

A 14-mi. trip in good VFR conditions would not likely have caused any difficulties, even on questionable battery power; however, the weather for the attempted flight was not "good VFR." It had been reported at 300 ft. overcast with visibility 2 mi. most of the day. Waiting until the following morning to ferry the aircraft to airport B to get the alternator replaced would have cost the pilot a couple of hours' delay in the start of his Florida trip.

When forced by the weather to fly a full instrument approach on a fading battery, the pilot knew that he had a serious emergency, and he should have declared it. The controller knew about the aircraft's mechanical conditions, but reasonably expected the pilot to have enough battery power available to do what was expected during the flight. Since the pilot did not declare the emergency, the flight was treated in a routine manner. Had the controller known that an emergency existed, he could have assisted by turning him in early for the ILS approach or perhaps immediately giving vectors for the surveillance approach.

The accident should not have happened. It happened because the pilot convinced himself that it was acceptable to take a questionable aircraft through poor weather to save a couple of hours. His good judgement was overruled by the self-imposed pressure to get an early start the next day.

Human factors experts would call it an example of a mental "trap" known as a "framing bias."

One of the things that contributed to the poor judgement illustrated in this accident is the way that a problem is framed. In risky decision making, there is a tendency to frame the problem as a choice between gains and losses.

With respect to lossed, people are biased to chance the risky loss, which they see as less probable, although more disastrous, than the certain loss.

Think about which way your bias is!