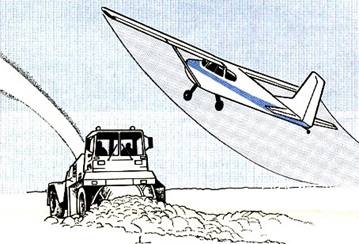 Three separate incidents recorded in a two-day period involved aircraft taking off knowing that vehicles were on the runway. Imagine having an engine failure just before liftoff — a few hundred feet before meeting the rotating jaws of the snowblower facing you!

One PA-31 took off from Stoney Rapids while a grader was working on the gravel runway.

Another PA-31 departed Red Lake with a vehicle on the runway. The flight service specialist was in the middle of passing the traffic advisory when the pilot reported that he was airborne. The specialist had yet to pass the vehicle traffic when the PA-31 zoomed overhead the surprised driver. The pilot said that he had been aware of the vehicle.

In a second Red Lake incident, a Cessna 185 pilot acknowledged the vehicle traffic and then took off in the face of the snowblower cleaning the runway. He neither transmitted his intent to depart nor gave the FSS specialist a chance to get the vehicle clear.

Care for a Little Formation Flying? Or, Sorry, I Thought That I Knew You!

A West Coast pilot was on a routine day VFR commercial flight when he heard another commercial aircraft depart the same airport about 15 min. after him on the same route. Knowing that the other aircraft was faster, he fully expected to be passed some time later. Imagine his surprise when that pass came so close that he could clearly see the faces of the other crew! He quickly established communications and separation.

Later, at their common destination, the second crew apologized, "We mistook you for someone else."

Our surprised pilot was not amused. He left little doubt in the minds of the offending crew that to fly that close to another aircraft without the knowledge of the other pilot, acquaintance or not, was an invitation to disaster. If the lead pilot made a decision to turn, a midair collision would almost certainly result. 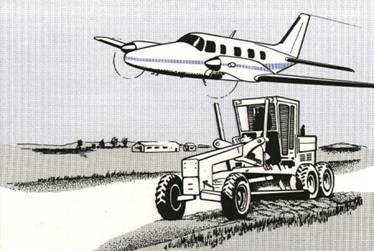 More Formation ... Just Wanted to See Who Was Flying!

A crew of a military CH113A Labrador helicopter was on a VFR search and rescue (SAR) training flight. They were making occasional diversions around rain showers in the area when they were surprised by a Beech 18 on floats making a pass down their right side, 75 ft. away, at the same altitude.

When the SAR crew made radio contact, the float pilot stated that he "just wanted to see [if he knew] who was flying." When the crew asked who he was, the intrepid formation pilot had a sudden radio failure, but it was too late: from only 75 ft. away, his identity was easily established. (One wonders if he is still working for the same company.)
SAR crews are always on the lookout and tend to manoeuvre very abruptly for reasons that would not be apparent to others, but that make them particularly dangerous to get close to: there is no reason for them to warn you of sudden attitude changes if they do not know that you are there.

Turn on That Localizer!

Would you attempt to fly an approach, in limits weather, using an unserviceable NAVAID?

Landing Traffic — In Your Face

Two Cessna light twins were operating at the same airport, one arriving and the other departing. Both aircraft had been given the traffic advisory indicating that 23 was the active runway. The MEDEVAC arrival had advised that he would be landing on Runway 23, following another aircraft also using Runway 23. The Cessna taxiing for departure announced that he would be using Runway 05. He was informed of the arriving aircraft; nevertheless, he departed 05 and did not acknowledge the FSS request to turn. The arriving MEDEVAC had to take evasive action to avoid a midair collision.

An RCMP Twin Otter pilot was en route home to Whitehorse when he alertly spotted a hole in the ice of a frozen lake. Beside the hole, he saw two people waving frantically. In the snow beside the hole, the message "Send helicopter" had been stamped out. The two people were picked up before dark.

It turned out that a Stinson 108-2 had broken through the ice and sunk. It also turned out that the certificate of airworthiness for the Stinson was not in force. The aircraft was supposedly in "inactive storage." Now it is in "cold storage."

This pilot not only flew an aircraft that should have been in storage, but also failed to file a flight plan, and could have been on ice for a long time, were it not for our eagle-eyed RCMP pilot. 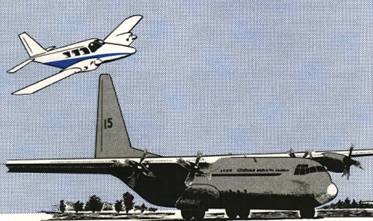 A military Hercules had just landed and slowed to taxi speed when a PA-34 took off from the same runway and zoomed overhead the C130 before it could clear the runway.

This random sampling of daily occurrence reports from the past winter makes us wonder why pilots are routinely accepting invitations to disaster.