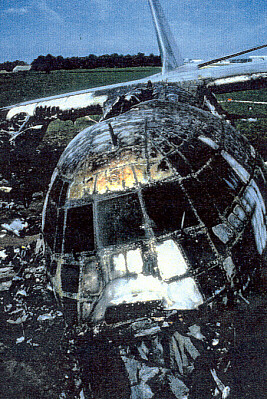 In the business of risk management, we frequently discuss abstract concepts such as active failures, latent conditions, causal effects as well as links in the chain of events that contribute to an accident. On July 15, 1996, a Belgian Air Force C-130 Hercules crashed at Eindhoven Air Base in the Netherlands, resulting in 34 fatalities and 7 serious injuries. The tragic circumstances surrounding this accident provide a poignant message that dramatically shifts abstract concepts into gut-wrenching reality.

The Hercules departed Melsbroek, Belgium, for Eindhoven Air Base via Villafranca and Rimini in Italy. On board were 37 passengers and 4 crew members. Of the 37 passengers, 36 were armed forces musicians who had given several performances in Italy. It was during the flight from Italy to Eindhoven that a chain of events began that, when examined carefully, can provide a valuable lesson.

The Hercules arrived ahead of schedule at Eindhoven, and was cleared for a visual approach to Runway 04. The airport bird control officer had previously been asked to report to the tower when it was assumed that the Hercules would arrive later in the day, although normal procedure required him to be on the field monitoring bird activity during flight operations. These circumstances required the bird control officer and air traffic control (ATC) staff to fire pyrotechnics from the tower to disperse a flock of birds that was observed shortly before the Hercules was due to land. The bird control officer and ATC staff failed to detect that a large, mixed flock of lapwings and starlings was sitting near the runway in grass, which had recently been mowed but had not been raked.

Just prior to touchdown, approximately 500 to 600 of these small birds were observed by the flight crew, who elected to carry out a missed approach. During the overshoot, the No. 1 and No. 2 engines were severely damaged by bird ingestion. The crew also feathered the No. 3 engine, likely believing that this engine was also damaged. With only the No. 4 engine producing power, the aircraft yawed approximately 70 degrees to the left, banked approximately 35 degrees to the left, lost altitude and crashed into the ground. The fuel tanks ruptured and flames engulfed the aircraft.

While the aircraft was still airborne, ATC staff activated the crash alarm, and emergency response staff reacted immediately. A misunderstanding during the initial calls resulted in the assumption that only the flight crew was on board the aircraft, with the result that backup fire fighters did not respond. A further assumption that the flight crew could not have survived the fire led to the decision not to enter the severely damaged aircraft (see photo). Because of these assumptions, more than 25 min were lost in the rescue effort. Meanwhile, survivors were unable to evacuate the aircraft because the doors had been damaged in the crash. Survivors were evacuated to the local hospitals 40 min after the accident.

Freshly mowed grass that is left unraked near a runway is an inviting site for birds. Had the mowed grass been properly disposed of, the probability of having a large flock of birds resting there would have been reduced, and it may also have offered a better view of the birds from the tower. Had more effective communications taken place during the initial calls, especially regarding the number of people on board, the fire fighters would have responded accordingly and possibly reduced the number of casualties.

Finally, the initiation of a missed approach in such a situation is something to reflect on seriously, and perhaps this issue could be discussed among pilot groups. We have received a number of reports describing incidents in Canada where pilots initiate an overshoot once they see birds in the runway environment, often resulting in aircraft control problems. Harm to turbine engines involved in bird-strike incidents is greater when the engines are operating at high power settings.

Although we fully realize that the critical decision to either overshoot or continue with the landing rests with the aircraft captain, bird-strike reports suggest that it may be advisable to continue with an assured landing, instead of applying full power and flying through a "cloud" of birds.

Perhaps the Eindhoven tragedy may have been prevented had one link in the chain of events been broken. The fact that the Dutch military has a state-of-the-art bird control program proves that if such an accident can happen there, it can happen anywhere.