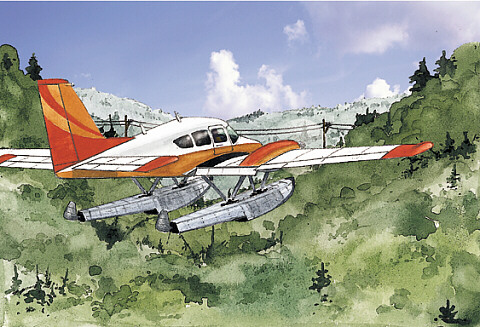 Artist's impression of choices faced by the pilot, who was unable to climb properly after takeoff.

On August 22, 1997, a float-equipped Piper Aztec with three occupants on board attempted to take off from Squaw Lake, Quebec, under visual flight rules. The pilot first tried to take off northward, but had to abort the take-off because a fuel tank cap was open. A few moments later, he began the take-off run southward; the aircraft travelled about 8000 ft. before becoming airborne. The aircraft did not attain a high rate of climb, but continued its flight at about 100 ft. above the trees.

The flight service station (FSS) specialist, who was following the aircraft visually, noticed a brief power outage at his work station then saw a cloud of smoke rising on the horizon. He tried unsuccessfully several times to contact the aircraft by radio. He then asked a helicopter flying over the area to go to the source of the smoke and check whether an accident had occurred. The helicopter pilot arrived a few minutes later and confirmed that the aircraft had crashed after striking a high-voltage line.

Following the crash, an intense fire then erupted, but the pilot was able to evacuate the aircraft by the left forward door, passing through the flames and suffering serious injuries. The two passengers were unable to evacuate and were fatally injured. This synopsis is based on Transportation Safety Board of Canada (TSB) Final Report A97Q0183.

The pilot had little rest in the 48 hr. before the flight. He had been busy preparing his hunting camps for the season that was just opening. Logistics and monitoring his employees took a great deal of his time. He had slept for only about three hours on each of the two nights preceding the flight. On the morning of the occurrence, the pilot left his home at around six o’clock to take a commercial flight from Dorval to Schefferville, Quebec. From Schefferville, he was to fly his private aircraft to take two cooks to two different camps. The clients of the pilot’s hunting camps had already taken off and were en route to their destinations.

The aircraft was loaded by the pilot’s two employees at the Air Saguenay dock while he was busy preparing the aircraft for the flight. No baggage or cargo was weighed on the scale available on the dock. According to the TSB, two weight and centre of gravity (C of G) estimates were calculated. The first estimate was evaluated by the pilot, and it showed that the aircraft was not overloaded and that the C of G was within the envelope. The maximum zero fuel weight, which is 4400 lb., was exceeded by 113 lb. A second evaluation was done according to the statements of the employees who loaded the aircraft. According to that evaluation, the aircraft was overloaded by 322.5 lb., and the C of G was 5.97 in. aft of the aft limit and outside the envelope. In that configuration, the maximum zero fuel weight was exceeded by 630.5 lb.

A few minutes after the occurrence, the Squaw Lake winds were from 120° True at 3 kt. According to the pilot, there was a light tail wind on the takeoff toward the south.

Squaw Lake is oriented northwest/southeast and is about 2½ mi. Long. To the southeast, at the end of the lake, there is a valley between two hills. The elevation of the lake is 1616 ft. above sea level (ASL), whereas the elevation at the first point of impact of the aircraft was 1800 ft. ASL.

Normally, once the aircraft was flying, the pilot lowered its nose to retract the flaps and allow the aircraft to accelerate at the best rate of climb. In this case, the pilot could not retract the flaps because of the shoreline and the obstacles that were quickly approaching. He pulled back on the controls and tried to gain altitude while maintaining a speed of approximately 80 mph, with the flaps still down 15°. The pilot attempted to clear the obstacles on his flight path, but when the high-voltage wires appeared ahead, he could not take evasive action to clear the obstacle. The aircraft struck the high-voltage lines and a wooden pole, then went nose down and pivoted around the pole before crashing on the ground.

According to an experienced pilot with many flying hours on the same float-equipped aircraft type, the aircraft requires a distance of about 3000 ft. for take-off when loaded to the maximum weight of 5200 lb., with the flaps at 15. For example, on a lake a mile and a half long, if the aircraft does not lift off within the set limits, the loading must be revised to distribute the weight better and the floats must be checked to make certain they do not contain any water. According to this pilot, the most critical factor is not to exceed the 150-lb. limit in the aft baggage hold so as not to move the C of G aft outside the envelope; that would cause the aircraft to be nose-up, both during the take-off run and when airborne.

Analysis - The pilot had not taken enough rest when preparing for the flight and had not allowed enough time to prepare his camps for the hunting season, placing himself under pressure. He was highly stressed because of the very tight schedules he had set for himself. The pilot, pressed for time, did not check the cargo weight on the scale available on the loading dock and decided to take off with an aircraft that was overloaded and whose C of G was too far aft. Because he knew that his clients were already flying to the camps and that the cooks had not yet arrived, the pilot was determined to take off on his second attempt. The aircraft used a greater than normal distance before lifting off. At any time during this second attempt, the pilot could have aborted the take-off run and revised his load, but he decided to continue.

The aircraft took an abnormally long distance before rising out of the water because of its nose-up attitude, which was caused by the fact that the C of G was outside the envelope and displaced aft, and because of the excess weight. This nose-up attitude of the floats in the water caused drag that prevented the aircraft from accelerating within the normal distance during the take-off run. After 8000 ft. of take-off run, which is over twice the distance normally required, the aircraft lifted off, partly because of the ground effects phenomenon.

Then, seeing the approaching obstacles on the shoreline, the pilot pulled back on the controls to try to clear them. The aircraft was travelling at 80 mph, which is well below the recommended climb speed of 120 mph and even below the speed for the best climb angle of 107 mph. Because of its configuration, the aircraft stall speed was higher than normal. It can thus be concluded that the aircraft was in the slow-flying range. The more the pilot pulled back the controls, the greater the drag. Thus, the aircraft could not attain a climb rate sufficient to clear the obstacles on its flight path and it struck the high-voltage lines and a pole.

The TSB concluded that as a result of its excessive weight and its C of G outside the envelope, the aircraft lifted off only after a long run and it could not maintain a rate of climb sufficient to clear the obstacles on its flight path. Contributing to the occurrence were the pilot’s stress, disorganization and fatigue.

Now, although technically accurate, was this really a C of G accident? Or was it a human accident? What truly allowed the events to unfold as they did? We, as pilots, have the ability to control, to a certain degree at least, the sequence of events. Let’s call it The Human Element - the most important of them all.