A Cirrus SR-22 took off for a "Round-Robin" VFR slight near Calgary Alberta. After a touch-and-go at its initial destination, the aircraft began its return flight. But while en route, the aircraft stalled, spun, then entered a spiral dive and impacted the ground, killing all three occupants. The wreckage was then consumed by a post-crash fire.

Due to the near-vertical attitude, all wreckage was located with 60' of the point of impact. The severe post-crash fire consumed all but the tail, so there was very little information to be gleaned from flight instruments, etc. As a result, airframe failure or system malfunctions couldn't be ruled out conclusively. However, investigators were able to deduce that the engine had been running all the way to the ground and that both door latches were in the closed position on impact.

Weather was ruled out as a contributing factor as the conditions were C.A.V.U., with nothing more than a light breeze at the time of the crash. The pilot-in-command had a valid private pilot license in addition to instrument, multi-engine & night ratings. His total flight time was 567 hours of which 448 were in a Cirrus. The pilot had also taken a transition course in the SR-22, in addition to 50 hours of dual on his new aircraft and another 150 hours with an instructor to improve his skills and remain current. Not surprisingly, the pilot was described as "...competent and cautious in his approach to flying." The other two passengers on board were also pilots, and both had just become partners in the aircraft that day. The flight was more than likely intended to familiarize both new owners with their airplane.

Due to the all-consuming nature of the post-crash fire, investigators had to piece together the causes of the crash from other sources. One clue was an "oscillation" reported by witnesses after the aircraft's touch-and-go landing. As the Cirrus employs a unique control system consisting of a single yoke handle protruding from the left and right sides of the instrument panel, and as roll inputs are controlled by rotating the handle, there is a short adjustment period for pilots used to more conventional systems. 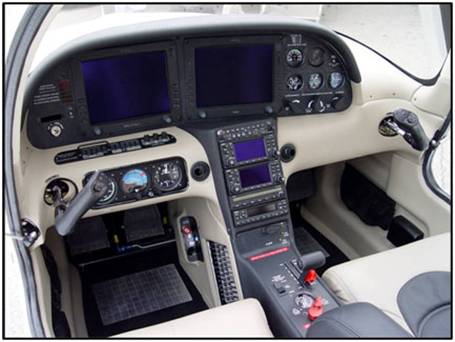 And as this was the first flight for both new owners, it is reasonable to assume that the right seat "passenger" may have been flying the plane when the incident occurred. (The post-landing "oscillation" is another indication that this may have been the case.) If this is what happened, it is again feasible that the stall and ensuing spin were caused by the inexperienced right-seat passenger over-correcting the distinctive Cirrus controls.

The saddest part of this tragedy is that the Cirrus was equipped with a rocket-powered Airframe Parachute System. And as the Cirrus "...is not approved for spins and has not been tested or certified for spin recovery characteristics, the only approved and demonstrated method of spin recovery is activation of the Cirrus Airframe Parachute System. Because of this, if the aircraft departs controlled flight, the CAPS must be deployed."

The aircraft appears to have entered its spin about 1,600' above ground, which was more than sufficient for the CAPS to have been deployed. However, the pilot opted not to fire the parachute system and appears to have attempted a normal spin recovery, which degenerated into a spiral dive. There were some indications that a recovery had been successfully achieved, however during the attempt at a pull-out, the aircraft struck the ground at high speed.

What lessons can be learned from this tragedy? We may all have been tempted to let our right-seat passengers "try the controls" from time to time, but in this case that decision – if made – may have led directly to the subsequent crash.

As for the decision not to use the ballistic parachute ... while probably made thinking the procedure might damage the aircraft in some manner, whomever was at the controls forgot that the Airframe Parachute System is the only approved manner for recovering from spins in a Cirrus.

The tragic end to this flight only serves to prove the truth of this critical part of the Cirrus Aircraft's certification.