Cessna 172M - Loss of Control and Collision with Terrain

The Cessna 172M departed Springbank Airport, Alberta, on a visual flight rules flight to conduct a pipeline patrol.  While the aircraft was circling an area of interest on the pipeline it entered a spin, descended steeply, and collided with terrain at 1734 Mountain Daylight Time. The pilot, who was the sole occupant of the aircraft, sustained fatal injuries. The aircraft was destroyed by impact forces, and there was no post-impact fire. The 406-MHz emergency locator transmitter activated on impact. 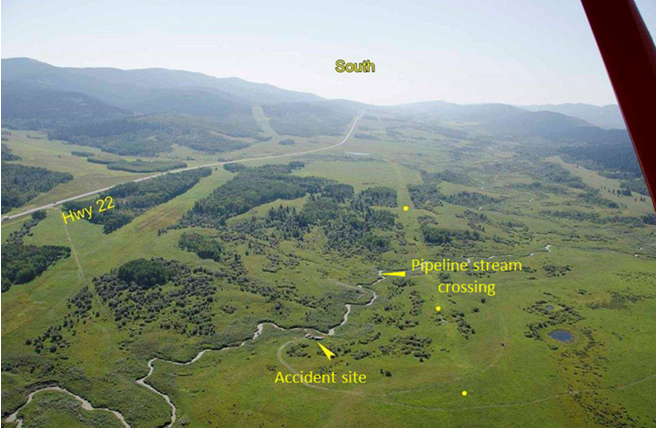 Witness statements indicated that, in the vicinity of the accident site, the aircraft made several low-level left-hand turns. A change in engine sound was heard, accompanied by entry into a spin to the left and a rapid descent. When the aircraft did not recover from the descent, an emergency call was made via satellite phone by witnesses, who reached the site on foot approximately 1 hour after the accident.

Records indicated that the pilot was certified and qualified for the flight in accordance with existing regulations. The pilot had a total flying time of approximately 6900 hours. The pilot was reported to be well rested and in good spirits on the day of the accident.

Weather conditions for this flight were very favorable. Temperature was 19°C, the dewpoint was 6°C, and the wind was at 5 knots, gusting to 12 knots, visibility was unlimited and the sky was clear.

Records indicated that the aircraft was certified, equipped, and maintained in accordance with existing regulations and approved procedures. Wreckage examination did not reveal any pre impact discontinuity in the flight controls.

At the time of the accident, the weight and balance of the aircraft was determined to be within limits.

The pilot was maneuvering at relatively steep angles of bank, at low airspeeds and at a low altitude. The pilot was also taking photographs of the subject area while maneuvering the aircraft.

Flight conditions during the final moments of the flight were conducive to stall and subsequent spin entry. These conditions would have been a relatively low airspeed/high angle of attack, steep bank angle to the left, moderate engine power, and possible excessive left rudder application. The steep descent, short wreckage trail, and low ground speed point to a loss of control at low altitude due to aerodynamic stall. Ground scars indicated that the spin rotation had been stopped; however, insufficient height remained to arrest the high rate of descent.

Comments from TSB investigators include: