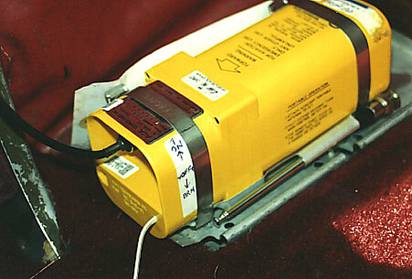 Have you removed the batteries?

"What's that?" you say " There's no SAR in garbage, regardless of what language you're spelling." That may be true. But a month or so ago, there were numerous SAR techs and other SAR-related people rummaging around in a Canadian garbage dump, much to the consternation of the resident Jonathan Live-it-up seagulls, who are not accustomed to fighting with SAR techs for their share of the — ahem — spoils.

What on earth brought them there? Initially, it was something above the earth. COSPAS-SARSAT to be exact. These alert sentries detected an ELT signal. Using suitable linkage, the SAR system came up with a fairly large circle in which the ELT could be located. A SAR aircraft initially aimed at the circle, then, as it flew closer to the site, homed to the beacon. The spotters squinted through their various windows, looking for the scattered remains of an aircraft.

Despite their squintiest gazes, there was no sign of an aircraft, but there was lots of aerial activity. Flocks of seagulls, buzzards and pterodactyls wheeled soared and swung in the air currents wafting heavenward from the local garbage dump.

Could the aircraft have gone in like a dart and have been covered up with garbage? Perhaps, but there were no reports of missing aircraft in the local area. Besides, as garbage dumps go, this one was reasonable tidy. It did not look as though it had recently been re-arranged to accommodate a crashed aircraft.

But there was no doubt about it. The ELT signal was coming from the garbage dump. What to do? Find it. Thus it was that a flock of folks went rummaging through a garbage dump looking for a transmitting ELT.

Eventually, they found it. Down at about the 3-ft level, searchers came upon a perfectly serviceable ELT, squawking its little electronic heart out. Someone had discarded it with the batteries still inside, and the function switch in the ON position. When the bulldozer operator came along to spread out fresh treats for the gulls, the blade evidently gave the ELT a sharp enough rap to set it singing.

SAR was in the seagull-herding business on the West Coast, as well. Several aircraft, Vancouver Area Control Centre and the satellites all reported an ELT close to Vancouver Harbour. Again, there were no reports of missing aircraft, and the ATS people running the harbour traffic still had an equal number of takeoffs and landings. Even if they hadn't, any ELT that had slipped below the waters wouldn't be disturbing all those folks on the surface. A SAR Labrador was summoned. Again, the spotters had their eyeballs spring-loaded to the pop-out position. When they got close to the "on-top" position they looked down a saw a ship. The signal ceased before they could confirm its origin. They went home.

A few hours later, the Coast Guard reported hearing an intermittent ELT signal. Industry Canada was called in. After following the bouncing signal around the Harbour, they were led to the same ship which had attracted the Lab. Being a container ship, it was full of, what else?, containers. Inside one of the containers was a neatly packaged helicopter headed to an exotic foreign destination.

Inside the helicopter was — you guessed it — an ELT with its function switch in the ARMED position. Apparently the crane operator didn't set the helicopter container on the deck with the same delicacy that a pilot might have used. The ELT thought that it had crashed. Despite all the bits of ship that were in the way, the signal still made it out into the ether with sufficient strength to keep SAR excited for the best part of eight hours.

Not many people are discarding ELTs right now. The ones that they have are adequate; they'll do until the regulations change, some time around the year 2000. But as that time comes closer, more people will buy new ELTs and discard their old ELTs. If they do it the way that the garbage dumper did it, they could destroy the SAR alerting system for a lengthy period.

Similarly, if you're shipping an aircraft by ship, train, truck or air, ensure that the ELT function switch is OFF. If possible, remove the batteries. Placard the aircraft when you do this, so that the pilot at the other end of the voyage knows that the ELT — and the batteries — must be re-installed before flight.

The ELT-SARSAT-SAR-CASARA team works well to provide SAR alerting, pinpointing and rescue. Around the world, the team has been instrumental in locating and rescuing 1624 aviators in 755 aviation distresses since 1982.

Good as they are, they need your help. You buy, use, maintain and eventually discard the alerting part of the system. When doing so, please use the same high standards of airmanship that mark your other aviation activities.